'Be the change you wish to see in the world'

Gandhi once said 'You must be the change you wish to see in the world.'
Yes perhaps I stole that line from a movie, (Monte Carlo - Yes, a chick flick, but quite a good one. Starring one of my favourite actresses, Leighton Meester - not Selena Gomez.) Anyway upon hearing that line for the first time I was quite inspired and the quote sort of well - stuck, and I sort of based my New Year Resolutions around this quote. I have a list, a rather long list. Some I doubt I will achieve, but here's to trying. Want to hear them? Well you are in luck.

1. Be in New York for my 21st Birthday.
This is my number 1, and one I very much want to accomplish, besides I have a 'big' birthday this year. Not that I care too much about it, I hate the whole embarrassment and being centre of attention. Like last year! When I specifically said I didn't want a cake! and what happens? I get a cake with a firework for a candle! I definitely was not amused! My table drew more attention than the other table who was celebrating someones birthday and they had twice as many people! Let's just say I haven't really had very good birthdays since my 17th, my 16th wasn't exactly brilliant either. Anyway, this is my personal wish, to be in New York as I add another year to my age. 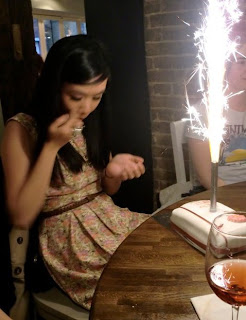 (My 20th birthday...see the firework)

2. Get back into driving.
I passed my test back in August 2010, before I started uni, that was my goal! to pass before I started uni, the one before that was to pass before I turned 19, unfortunately for me, I failed my test a day before my 19th birthday. Like I said not had the best birthdays. Anyway since it took me three times, and I honestly thought I failed my third test, I haven't driven since last January, yes that is most likely a year ago, and I agree it is awful. So hence why...I need to get back into driving, but I am scared.
3. Spend a weekend in Ireland.
As suggested by my cousin's husband. quite sound advice as well. I haven't really experience life as a student, since my course is only two days a week and well all the friends I have made are commuters too. I don't really know what it is like to be away from family. Sure I have been on a international flight by myself. (Which was very scary.) I haven't really experienced life on my own. so what better way to do that, then having a weekend away. Ireland is my destination,I have always wanted to go and who doesn't love the Irish accent? I was planning to go before my trip to NY, time will tell if I make to the land of leprechauns.
4. Get a 2:1!
I would love a 2:1! I have never been academically brilliant. Never got an A, (well only in coursework) I mean in final grades always got B's and C's and Alevels...well let's just say I didn't fail. Some may say achieving a 2:1 is achievable, in my books, if I don't...it is the end of the world. I was devastated last year for only getting a 2:2. Getting a 2:1 is important to me and I am working hard to try achieve that. My New York dream sort of depends on doing well in uni. I mean I don't want to be out in the states and find out that I failed my second year.
5. Finish a story!
I am an amateur writer, nothing published! I am not that good! I write fanfiction and have original writing in progress. Let's just say it is taking me a while to write, and with uni and work well squeezing in time to write is hard - but not impossible. So yes I would love to finish a story.
6. Be Spontaneous!
I am not a spontaneous person. I personally like things well organised and that I know what is going to happen. Probably why I don't like driving! Let's just say I am a girl who likes to live in a safe bubble, afraid to try new things because I don't know what the outcome may be. So it is about time I step out of my bubble and be more spontaneous...in an organised way. Well that sorts of contradicts the whole being spontaneous thing. Well I can't just go to New York without a plan, can I?
7. Do not leave essays to the last minute!
Ok, I don't normally leave work to the last minute, but who does work over the Christmas holidays? Besides that is three weeks to do two essays! I have finished my essays now...first drafts anyway and it is Friday night...and I really need to go through those essays but I am writing my blog...well who doesn't get bored with uni work.
Friday Night - Lady Antebellum
And since I mentioned the words Friday Night, I thought why not put in a song by Lady Antebellum, my current favourite band :)
8. Get up earlier!/Sleep earlier!
Something I don't see happening but still worth a try right? I love my sleep a little too much.
9. Go out more, live a little.
Yes I need to do that, hence my New York Dream!
10. Be my age.
By no means am I immature, in fact I am very mature for my age. Always have been. I am not like the other 20 years old, I don't enjoy going out clubbing or drinking my guts out. My idea of a Friday/Saturday night would be watching a movie, reading, listening to music or simply writing. Even at 18 I was not too keen on the idea of clubbing. That does not mean I don't go out...I do. On special occasions, like New Year's and birthdays. I have spent my teens wishing I was older and well let's just say I shouldn't be wishing my life away...I should enjoy being 20...well for another 6 months anyway...before I turn 21.


So as you can see from the list New York is the top one. The main priority. I have always wanted to go, I fell in love with New York through books, TV programs and movies. I only really thought about physically going to New York when I was 18. Well 18 and a half. Someone asked me what my ambition was, what my to do list was by the time I turned 21. I never really had a to do list before, so it got me thinking and well to be in New York on my 21st birthday became my ambition. So here I am, six months before June, hoping my dream comes true. All I want on my birthday is me and New York City (And nice weather...if possible). No cake, no presents, no embarrassments. Just me and the city that never sleeps. So like Gandhi said 'You must be the change you wish to see in the world.' If you want change, if you want something to happen, it is down to you to make that change.